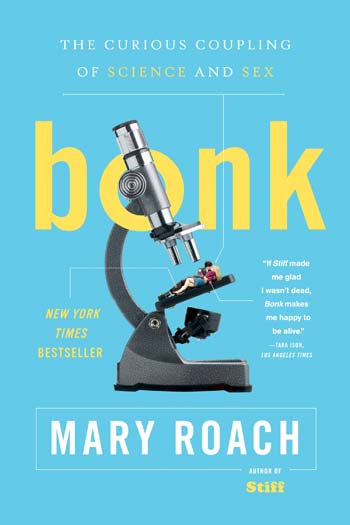 "In her previous books, "Stiff" and a follow-up, "Spook," Mary Roach set out to make creepy topics (cadavers, the afterlife) fun. In "Bonk," she turns to sex, covering such territory as dried animal excreta used as vaginal "drying agents"; a rat's tail "lost" in a penis; and a man named William Harvey, patent-holder for a rolling toaster-size metal box outfitted with a motorized "resiliently pliable artificial penis." In short, she takes an entertaining topic and showcases its creepier side.
And then she makes the creepy funny... " —New York Times Book Review, Sunday, March 30, 2008. Read full review.

If Mary Roach ever writes a book called "Worm: The Curious Science of Deep-Sea Tube Worms and Hydrothermal Vents," I would still read it, because she's one of those rare writers who can tackle the most obscure unpleasantness and distill the data into a hilarious and informative package. I would devour every page of "Worm." I would laugh out loud at Roach's stealthy encapsulation of ridiculous tube worm research, yet in the end, I would be able to dazzle and surprise friends with a newfound knowledge of tube worms.... —San Francisco Chronicle. Read full review.

"One of the funniest and most madcap of science writers. . . [Roach's] latest is no less captivating or entertaining, as she flings wide the closed doors behind which the scientific study of coitus has traditionally been conducted.... Emulating her subjects' daring spirit, Roach displays a firm belief that there is no question too goofy to ask—or, barring that, to Google....A lively, hilarious and informative look at science's dirty secrets."—Kirkus, starred review

"Tucked between the jokes and anecdotes, you will find lessons on impotence, orgasm, unusual and unusually brave scientists, and the sexual behavior of other species, including a hilarious description of porcupine sex....Bonk is a light-hearted cabaret act of a book by a writer who genuinely seems to be enjoying herself—in more ways than one."—Deborah Blum, New Scientist

"Roach ferrets out basic truths and endless absurd details amid mountains of dry science on her chosen subject, in this case, sex. Her most witting collaborators, the scads of sex researchers throughout history, provide plenty of source material. It's a wonderful read, sprinkled with facts you can quote to amaze your friends."—Jack Boulware, San Francisco Chronicle

"It takes one kind of skill to pack a book full of scientific information (physical, chemical, emotional) about human sex and sexuality research in the twentieth century and to do it with care and thoughtfulness. And it takes another kind to do it with wit, humor, and pure enjoyment. Roach's third book beautifully succeeds in both categories... Highly recommended."—Library Journal, starred review

"In Bonk, Mary Roach, author of Stiff and Spook, tackles the myriad mysteries and questions surrounding sex. Employing the style that has earned her praise as "the funniest science writer in the country," Roach takes the reader on a wide-ranging tour of the forefronts of research into human sexual life and practice, ranging from laboratories to brothels."—Chicago Tribune

"With Bonk....Mary Roach has written a volume so viscerally funny, it's easy to overlook how obsessively she's researched her subject. But Roach's tales of a day with pig inseminators, a hands-on experience with penile implants, and a romp under an ultrasound machine serve as not-so-subtle reminders of her commitment to writing the first-ever comprehensive book on sex research."—Seed

"Bonk is an extended literary comedy routine.... [It] reads like a wild night of abandon."—Bloomberg.com

"Even if there were thousands of science-humor writers, [Roach] would be the sidesplitting favorite." —Booklist, starred review

"Roach's ever-present eye and ear for the absurd and her loopy sense of humor make her a delectable guide through this unesteemed scientific outback. . . .Roach's forays offer fascinating evidence of the full range of human weirdness, the nonsense that has often passed for medical science and, more poignantly, the extreme lengths to which people will go to find sexual satisfaction."—Publishers Weekly

"Roach's witty style begets giggling for the right reasons, with well-turned footnotes that are fun to read aloud to prudes."—Paste

"When Mary Roach researches a book, she doesn't do it half way.... So it's no surprise that when writing Bonk: The Curious Coupling of Science and Sex, she didn't just interview sex researchers, or pore through centuries of lab notes—she actually volunteered to have sex in the name of science. And by that we mean she brought her heroic husband, Ed, from their home in California to an exam room in London to have a physics professor do some real time, 4-D ultrasound footage of their bodies (or at least the relevant parts) in motion. It's difficult to say who deserves more credit for bravery, Mary or Ed, but the result is a hilarious scene for a book that she calls a tribute to the men and women who brave ridicule to investigate why we do what we do, in bed—or don't."—Newsweek Online

"I would read Mary Roach on the history of Quonset huts. But Mary Roach on sex? That's a godsend! This book is—if not better than the act itself—then a hilarious and entertaining alternative."—AJ Jacobs, author of The Year of Living Biblically

"Lucky for us, Mary Roach is a writer impervious to embarrassment. Showing uncommon aplomb in the face of exceedingly odd people and situations, she gamely takes on subjects as weighty as death, the afterlife, and now. . . sex. We're all voyeurs at heart, with a desperate need to scratch at these vital, lurid, uncomfortable questions. Thank god we have Roach to do the scratching for us!"—Hampton Sides, author of Blood and Thunder and Americana

"For Bonk, Mary Roach plunged into the little-known realm of sex research and brought forth an account that is at once revealing—alarmingly so—and very very funny. She studs (forgive me) her journey with a multitude of knee-crossing bits of fact that will enliven bedtime conversation everywhere."—Erik Larson, author of Devil in the White City

"Mary Roach is the funniest writer on sex and death since Sigmund Freud..." —Peter Sagal, host of NPR's Wait Wait... Don't Tell Me!

Like "Stiff," "Bonk" ... is rich in dexterous innuendo, laugh-out-loud humor and illuminating fact. It's a compulsively readable, informative history of the scientific inquiry into the hows and wherefores of engorged tissues and sweaty palms... —Tara Ison,  Los Angeles Times